A beautiful weekend for tree planting with our friends at @poudrewatershed, in an area burned by the #CameronPeakFire in 2020.
3 generations of tree planting in one photo 💚🙏🏽
It was great having @repjoeneguse on our porch for a great conversation,you can read more about it on our blog (link in bio).
There’s something different about us today… a new haircut? New glasses? Nope!
The results are in and according to the recent #IPCC #climatereport from the @unitednations we are headed towards inevitable temperature increases that will lead to even more climate-driven migration pressures and likely put billions in harm's way.
We recently took a trip up the Poudre Canyon to survey burn areas from last year’s #CameronPeakFire, and the views were at once breathtaking and tragic. 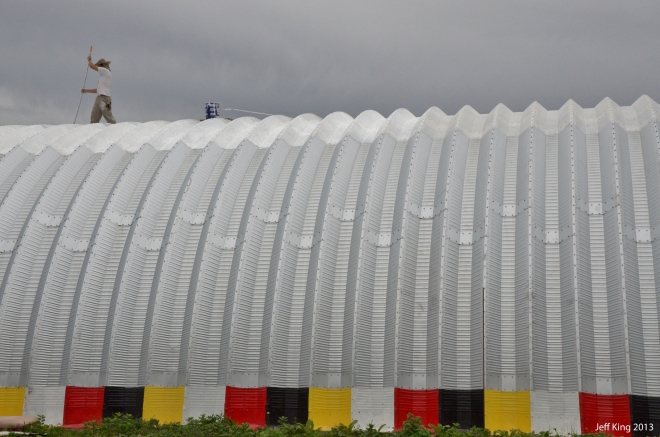 We are in the countdown phase of finishing the Sacred Earth Lodge. In just the few months that I’ve been working with Trees, Water & People and Lakota Solar Enterprises the building has completely transformed. The walls are up, the furniture is in and now we are only making the finishing touches to what will be an amazing center for learning and growth. Since my last update I’ve been busy with both the garden and the Lodge. Both are coming together amazingly. 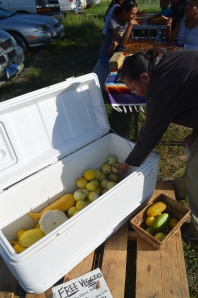 Because I am the Garden Coordinator, I guess I’ll start with the changes at Solar Warrior Farm. It’s still producing more than 100 pounds of cucumber a week. Last week I set up a free giveaway in front of the Tribal Office in downtown Pine Ridge. I had a lot of conversations with many different people about growing food and introduced quite a few to lemon cucumbers. Along with another giveaway earlier in the week, we handed out roughly 150 to 200 pounds of produce in one week.

The peppers have started to harvest and the corn is coming down in the next two weeks. Some of the corn is infected with corn smut. It is considered a disease throughout most of the United States but is eaten as a delicacy throughout Central America. I’ll have to try it. The squash is continuing to give a bountiful harvest and the tomatoes continue to be delicious and colorful. I recently transplanted some kale into a nice raised bed and I am crossing my fingers the first frost will not arrive too early. 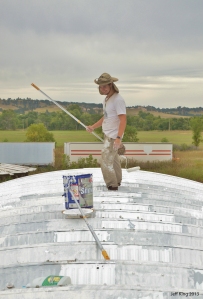 We just put up the ceiling for the Sacred Earth Lodge. It was the biggest tarp I’ve ever seen and it really ties the entire building together. Lots of long days and a bit of blood and sweat have really created something amazing. We are putting the finishing touches on the lodge. I was on the roof painting another layer of sealant with Jeff as the septic tank was being delivered. The trees that were planted just a few weeks ago are staying healthy, and the plumbing is being hooked up. I’m looking forward to the opening, and the next projects that are already being planned.

2 thoughts on “Notes from the Field: Bountiful Harvests and Finishing Touches”