It’s a Latin American baleadas battle! Who aced the test? 😅
Our crew made it to Central America to visit partners and communities.
In 2011, over 100 displaced families in #Guatemala self-organized to purchase a piece of land. Today, approximately 75 families reside in “La Bendición”, and the community continues to stand out for its strong leadership and capacity for self-management. These families undertook the task of looking for arable land in order to settle and start a new life.
One of our main priorities is to center #indigenoussovereignty through our work 💪🏼💪🏼
The secret is all about the throw in the words of Silas Red Cloud! Check out the techniques and process that our Lakota tree planting partners use for ponderosa pines 🌲🌲
Thank you @avocadogreenbrands for supporting TWP’s work over the last few years through @1percentftp! Over the weekend we visited one of their storefronts in California to say thanks and get to know more of their environmentally conscious and sustainable business practices. We love partnering with businesses like Avocado that care about protecting the planet 🌎 🤝🌱 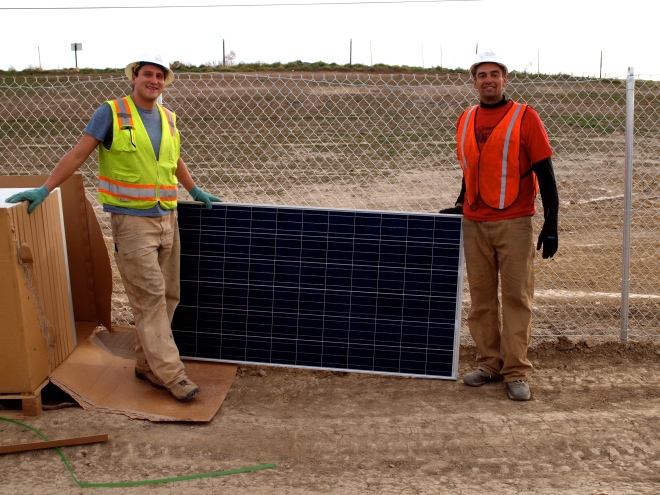 Using the knowledge and experience gained from their classes at the Red Cloud Renewable Energy Center, three of our Native American trainees are currently employed by Bella Energy to install a 1 megawatt photovoltaic “Solar Garden” in the city of Lafayette, Colorado.

Recently, I went down to support our friends at Bella, see the job site for the first time, and touch base with our students, Landon, Kale, and Jeff. Well, the job site was impressive. A 1 megawatt solar array is huge! The project is called the Lafayette Solar Garden. Funded by Xcel Energy’s Solar*Rewards Community Program, owned by the City of Lafayette, and available for use by residents and business in the town (“subscribers”), this is a tremendous community resource.

Bella Energy, an exceptional Colorado solar company (whose CEO, Jim Welch, helped found TWP’s Tribal Renewable Energy Program in 2002) is charged with the installation of the million watts of the Lafayette Solar Garden and subcontracted Lakota Solar Enterprises to help. So it came to be that Kale Means, Landon Means, and Jeff King were given this ideal opportunity to put their green jobs skills to use.

The City of Lafayette and local businesses will utilize the majority of the electricity generated by this solar garden resulting in annual cost savings and the offset of 1,034 metric tons of carbon dioxide, the equivalent of planting 27,883 trees and placing 213 zero-emission passenger vehicles on the road. 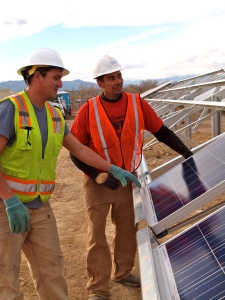 All from the Northern Cheyenne Reservation in Montana, Jeff, Landon, and Kale have been chomping at the bit to start this gig and were excited to experience a new place – living in Erie, CO for the duration of the job. For my part, I was excited to see them after their fourth day on the job and see how things were going.

When I arrived, the guys were nowhere to be found. Jeff text me that they had to go to get haircuts. It was great to see the Bella folks and hear good things about the Lakota Solar Enterprises crew, but what the heck? I drove an hour to attend the dedication ceremony, and all Jeff, Kale, and Landon had to do was not leave. I called Jeff after the festivities were finished to find out what was so important about a haircut. Well, it turns out that it was Kale’s birthday and he wanted a haircut for his own celebration. Happy birthday Kale!

It’s so great to see our friends thriving in this new environment and on the job. Thanks to Bella and the City of Lafayette for this opportunity, and thanks to Landon, Kale, and Jeff for being such hard working, talented, and now well-manicured guys.