In 2011, over 100 displaced families in #Guatemala self-organized to purchase a piece of land. Today, approximately 75 families reside in “La Bendición”, and the community continues to stand out for its strong leadership and capacity for self-management. These families undertook the task of looking for arable land in order to settle and start a new life.
One of our main priorities is to center #indigenoussovereignty through our work 💪🏼💪🏼
The secret is all about the throw in the words of Silas Red Cloud! Check out the techniques and process that our Lakota tree planting partners use for ponderosa pines 🌲🌲
Thank you @avocadogreenbrands for supporting TWP’s work over the last few years through @1percentftp! Over the weekend we visited one of their storefronts in California to say thanks and get to know more of their environmentally conscious and sustainable business practices. We love partnering with businesses like Avocado that care about protecting the planet 🌎 🤝🌱
In Honduras, the Indios Laborios de la Aldea de Suyapa are on the verge of a big win for their sovereignty, in declaring 5,000+ hectares of their communal forest a nationally registered Wildlife Reserve, to be co-managed by local communities.
At the Ute Mountain Ute Tribe (UMUT) in southwest Colorado, northwest New Mexico, and southeast Utah, #water is scarce. Tribal lands are located in the high desert, and the Mancos River is drying. #Climatechange, land management practices, and upstream irrigation diversions have resulted in low flows, and the Mancos no longer reaches the San Juan River, as elders recall from their youth. 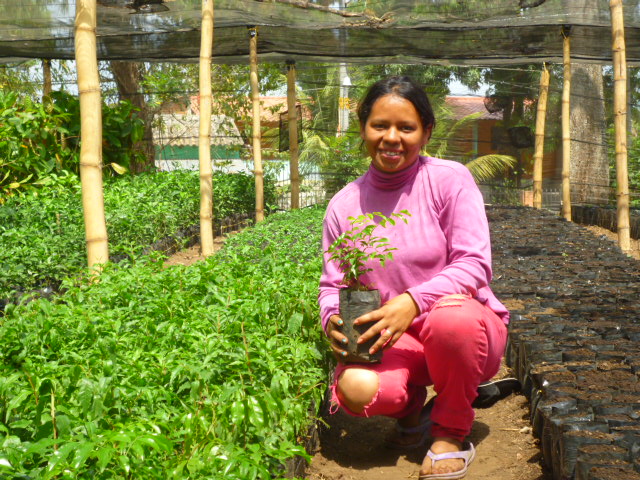 In every country where we plant trees, we employ local citizens to manage our tree nurseries and planting efforts. These dedicated individuals plant each seed by hand, care for the seedlings for months while they are maturing in our nurseries, and then help to oversee the planting of those trees.

Recently, our long-time partner Armando Hernandez, Director of Arboles y Agua para el Pueblo (AAP) in El Salvador, shared a story with us about his newest employee, a single mother raising two sons and a daughter.

Guadalupe Padilla was hired to help relocate the AAP nursery and care for the tens of thousands of trees grown at this site. She finds much pride in her work and the new job allows her to support her children while contributing to environmental conservation efforts in El Salvador.

Guadalupe believes that “We must conserve the environment for our children!” And why shouldn’t environmental protection also create jobs for people like Guadalupe, who live in rural areas where is employment is needed most?

Support one of our community-based conservation projects today!

Since 2001, we have worked with Arboles y Agua para el Pueblo (AAP) to plant a wide variety of trees in El Salvador. AAP is an ideal organization to work with because they have such a dedicated and hard working staff with close ties to the local communities. Since our partnership began, we have planted nearly 600,000 trees, helping to address environmental degradation caused by deforestation in this small Central American country.

Earlier this year AAP received some bad news. They would have to vacate the land where their tree nursery had been located since 2007 because it was being divided and sold. Armando Hernandez Juarez, the Director of AAP, explained, “We tried to negotiate, but we were told to evict the property immediately as the demolition would begin and the nursery was in the way.”  Moving the nursery would be a huge challenge because AAP had already planted 25,000 seeds, not to mention that they would need to take down, transport, and then rebuild the infrastructure!

Thanks to the generosity of a local family with land available, the AAP team was able to relocate the tree nursery, including the 25,000 bags of soil. The nursery staff worked really hard to make this move happen so we can continue to grow precious trees for reforestation efforts throughout the country. Armando said, “We recognize the work done by our staff to dismantle the nursery in El Carmen and reestablish the new nursery. These people worked hard and without sparing any additional time.”

We are so grateful to our dedicated partners at AAP who have worked tirelessly to keep our nursery in operation. We look forward to seeing this tree nursery bloom with life in the coming months. Great work team!