This week we received some honored guests at Trees, Water & People (TWP) headquarters – Marvin Córdova and his family from Tegucigalpa, Honduras. I met Marvin in early 2005 when I arrived in Honduras as an intern for TWP – he was the lead welder at our stove manufacturing facility, AHDESA. I still remember loading his stoves onto pick-up trucks in those early days to promote his business, and helping him install them in customers’ homes. He and I were co-workers at the time, but became close friends the more we worked together.

TWP got involved in cookstoves when we helped design the Estufa Justa in 1999 after Hurricane Mitch ravaged Honduras, cutting off crucial supply lines for fuel into the capital city, Tegucigalpa. The Estufa Justa was designed with technicians from Aprovecho Research Center, and local community members in the Aldea of Suyapa, who would critique the early prototypes based on local cooking preferences. One of the more vociferous of those community members was a woman named Justa Nuñez, for whom the stove was eventually named.

The Estufa Justa went on to become the flagship clean cookstove for Central America, with hundreds of thousands of units built since those first workshops. Several variations on the stove were designed and manufactured by Marvin Córdova and his team, and were an urban-appropriate, pre-manufactured, all metal version of the stove, named the Ecofogón. What began as a TWP project funded by the USEPA later became its own company, selling thousands of units across the country.

Marvin is one of many unsung heroes of the Mesoamerican stove movement that we are proud to welcome as he visits the U.S. with his family. He now owns his own custom welding shop in Tegucigalpa with seven employees, and while he still occasionally builds stoves by request, his principal business has grown to serve larger clients including industrial food processors, restaurant chains, and medical facilities. He is a true entrepreneur who weathered economic and political turmoil to build a persistent and successful company in Honduras. He is above all a great husband and father, and a loyal, long-time friend to me and TWP.

Gracias por la visita, Marvin!  We wish you continued success, and appreciate all  your contributions to our work! 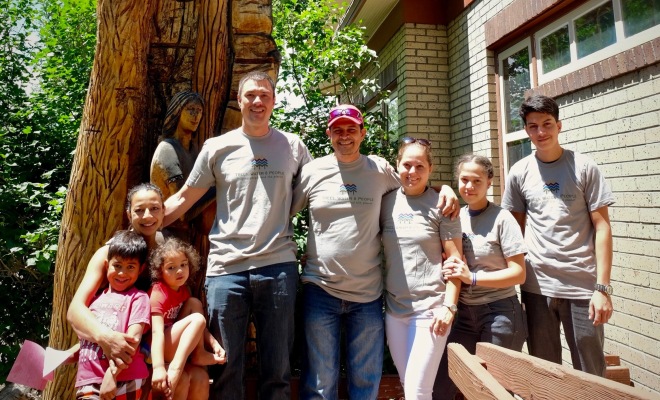 To stay up to date about TWP news, please sign up for our eNewsletter.