If you had told us in March 2020 that TWP would have our strongest revenue year ever, that we'd add staff, grow our programs, and break new ground in almost all our projects, we would have given you some serious side-eye...
A beautiful weekend for tree planting with our friends at @poudrewatershed, in an area burned by the #CameronPeakFire in 2020.
3 generations of tree planting in one photo 💚🙏🏽
It was great having @repjoeneguse on our porch for a great conversation,you can read more about it on our blog (link in bio).
There’s something different about us today… a new haircut? New glasses? Nope!
The results are in and according to the recent #IPCC #climatereport from the @unitednations we are headed towards inevitable temperature increases that will lead to even more climate-driven migration pressures and likely put billions in harm's way.

By Jon Becker, TWP Board President

I knew this day (September 22) was going to be special, even before I showed up.  I’ve been on the crew for several solar heating sytsem installations with Henry Red Cloud and Lakota Solar Enterprises – so I was familiar with the technology, the process, even the warm and appreciative response from the beneficiaries.  In the past, the recipients have always been Native Americans on reservations, which means I get to interact with wonderful people who live with a deep connection to culture and spirit and this land.

Today, for the first time, we’re off the Rez.  Instead of the Dakotas or Montana, we’re in the Arvada suburb of Denver, and instead of an esteemed member of the Oglala Lakota or the Northern Cheyenne, today’s installation will go on the home of a recently immigrated family from the Ukraine, that’s owned by the wonderful non-profit Colorado Homeless Families.  They’ve developed 45 properties in Arvada to serve as transitional housing to help keep newly poor families from falling into the deeper trap of chronic homelessness and poverty.  We started with coffee and conversation with CHF’s board and volunteers, including dynamic Executive Director Connie Zimmerman.  It was remarkable to learn about the very impressive program they have developed.  Then we walked across the street to start work on our installation – a solar heating system for the 100 year old building that was the original farm house for the property.  Henry’s crew, which included two of his sons, got to work scouting out the site, identifying where to mount the collector and locate the connections into the house.  Connie’s team dove right in too.

The changing face of homelessness, as well as the global nature of our efforts, was demonstrated by a gentleman from the Congo, with a PhD in engineering and now a resident in Colorado Homeless Families’ housing, who jumped in and helped dig postholes with us.  Lakota mingled with Ukrainian and African, TWP volunteers and CHF staff, board, family and friends.  The rain, always threatening, never did more than lightly sprinkle.  We dug, drilled, lifted, caulked, wired, lunched, talked – and had that amazing experience that the Lakota Solar Enterprises system delivers:  in the same day you go from scratch to an installed working heating system.

I asked our new Ukrainian friend if she had ever heard of a solar heating system, back in the old country.  “No!” she laughed, so I figured that I didn’t need to follow up with the question of whether she could ever imagine that one day in America she would have such a system installed on her home by a crew of Native Americans.  What a great day!

The next day Henry and his crew returned to Arvada and installed a second system on CHF’s office/community building in the same neighborhood.  This installation will serve as a great demonstration of the technology, and will benefit the staff and the local residents who use the space.  Trees, Water & People, Lakota Solar Enterprises, and Colorado Homeless Families are in discussions to explore possibilities of bringing more heating systems to their properties.  Opportunities to conduct installation trainings are also being considered.  At TWP, we could hardly be more excited and pleasantly surprised to see this relationship unfolding.  We didn’t really plan to expand our program to bring jobs and clean energy to the Reservations in this way, but once gain, “Life is what happens to you while you’re busy making other plans”.  Stay tuned to hear how this project progresses. 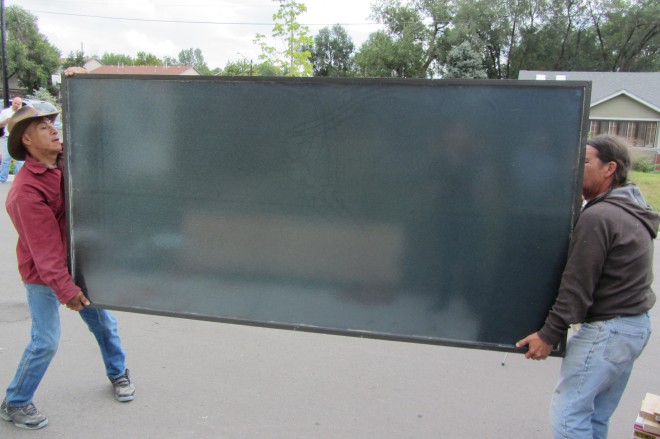